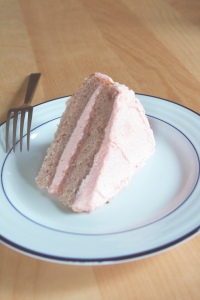 I decided that my birthday was the perfect excuse to try making a vegan cake! I really wanted something delicious and different than the typical vanilla or chocolate cake. I found several different recipes online, and settled on this one from Baker Bettie. The ingredient list was reasonable, the directions seemed easy, and the pictures looked great! So, I set out to tackle my first real vegan baking adventure since the vegan Earl Grey cupcakes. Here’s how it went:

I started with the frosting first. I wanted to make it the night before to help save myself steps the next day. I decided to use frozen strawberries for the puree, which seemed to work just fine – until it was time to add it to the frosting mixture. There I was, excitedly anticipating the first taste of my homemade vegan frosting, just happily mixing along and following the recipe. Then I added the strawberry puree and saw my frosting transform into a gloppy mess! This brings me to Very Important Note #1: While making this frosting, be sure that all ingredients are at room temperature. I didn’t, and the addition of the still-chilled puree broke the emulsion of the frosting, causing the fat and the sugar to separate. I was able to reverse about 90% or so of this mistake by whipping the frosting on high speed for a long time, however, this over beating caused the frosting to thin out considerably. The only way I could use the frosting at all was to refrigerate it first, and store the whole cake in the refrigerator after frosting. I wouldn’t usually store cake in the refrigerator, because it dries them out and can zap the flavor, but that actually wasn’t an issue with this particular cake.

The frosting tastes pretty good by itself like most frostings do, but the flavor only really shines once the frosting is slathered on the cake. The cake is very good, but it is far more dense than a typical birthday cake tends to be. This brings me to Very Important Note #2: I personally think that most cakes tend to be too sponge-like, and I found the texture of this cake to be very soft, moist, and delicious. The density is certainly due to the use of Egg Replacer. If you prefer a more traditional fluffy cake, then you may want to try a different egg substitute.

Only Semi-Important Note #3: The cake itself doesn’t have the super strong strawberry punch of flavor that I was expecting. For next time, I may reduce the strawberries in a pot with some sugar until desired thickness, add cornstarch, and mix this reduction into the cake batter in place of the puree.